According to a brief statement from Facebook, they took the action claiming that TTKM had made posts that were contrary to community standards regarding privacy. 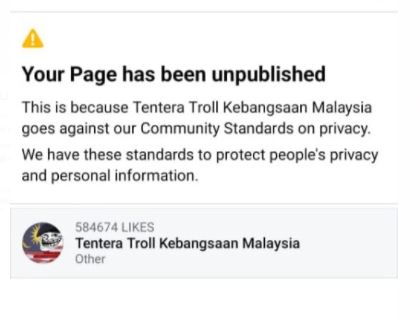 The last troll that went viral yesterday on the site was about a video of the Kepala Batas MUDA candidate who said a vulgar word when naming the party’s candidate on October 29. None of the privacy information is disclosed in the posting.

Contacted by the Buletin TTKM, the admin of the troll site said that the matter was expected to happen considering the 15th general election which is heating up.

Therefore, TTKM has prepared a backup plan by moving to a new site at:

In the same development, TTKM Bulletin has contacted Facebook Malaysia for feedback and is awaiting a response from them.

The TTKM page which was established since 2014 has as of yesterday more than 600k followers. -Buletin TTKM-

This site uses Akismet to reduce spam. Learn how your comment data is processed.